This summer has been so busy I haven't had time to write at all. I miss writing so much I can almost taste it. It wouldn't have to be here...but as long as tomatoes and babies and church activities and family get togethers and weddings and, well, I won't get to writing if this many other things always come first.

But we had a great vacation, and I'm running a canner full of tomatoes, so I'm squeezing in a bit of writing.

This year we went to visit our good friends in Oregon. For the first time in our lives we decided on a vacation and bought tickets even before school was out last spring. It was worth it. Getting our tickets so far ahead really saved us money. A month later we looked into changing our tickets to give us a day in L.A. and they were already double what we had paid. 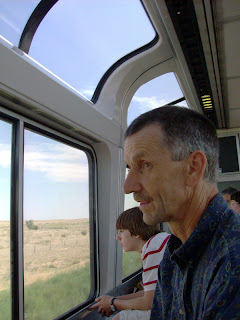 We took the train on the way to Oregon. It was important to me to see the country if we were going to go that far. The train sounded so good to me.

It was important to Chuck to not come home exhausted from 60 hours on a train, so we flew home.

Even so there was a lot of worry about whether it would be fun to be on a train so long. But I think we all agreed that while it was hard to sleep soundly, there was plenty of legroom, and it was fun to be able to move around and to spend time in the observation car.

Trains are notoriously late, so be ready for that.

We were scheduled to leave at 3:30 a.m., but it was about an hour late. After a couple of hours of sleep, we woke to a wind farm outside our windows. Already it was fun.

We saw mountains in Colorado, although we mostly stayed south of them. From La Hunta all the way to Albuquerque the National park rangers had commentary in the observation car. That was most of a day. We weren't there for all of it, but it was interesting while we listened.

The boy in the picture above quickly became friends with Wes and they spend a lot of time together on the way to Los Angeles.

Close to Albuquerque Chuck talked to someone who knew about a great food stand next to the train tracks that served authentic Mexican food. Because the train was late we only had about 20 minutes instead of an hour so we ran for the stand, grabbed our food, and gulped it down fast enough that Wes still had time to buy a souvenier blanket.

By evening on the first full day we had figured out where the outlet was in the observation car so Tim and I watched a movie on my laptop after dark.

I found the towns even more interesting than the countryside. Once we got pretty far west only the biggest homes had green patches of grass, and those were limited to small areas. The railroad tracks run through back yards so you get a whole different view than you do on a highway.

The most interesting thing about homes in the southwest was how they used their yard space. If there was space behind the house, it was usually not huge, nothing like homes around here. There was rarely grass, but frequently the whole space would be taken up by a small in ground pool with a small patio between the house and the pool. Larger yards frequently had a horse pen just beyond the pool. The horse pen was about the same size as the patio/pool area---definitely not enough to really exercise a horse. People must do a lot of in town riding there, because those horse pens were even in the bigger cities. Once in a while there would be a small green garden at one end of the barren yard.

Both trains got completely full at points along the way. The train to L.A. was fullest right before Fullerton, which is where you get off to go to Disneyland :-) There were a lot of very excited children in the observation car at that point.

The L.A. to Portland train runs along the coast for a significant part of the next day. Ocean on one side and mountains on the other made the observation car the place to be. But that train was also more of a party train and there was a group enjoying their alcohol there during much of the day. You could learn a lot if you listened to their increasingly loud conversations.

On that train was also an actress mom and her daughter. The mom spent the day in the observation car talking about her life and who she knows (John Travolta, Denzel Washington, etc.) and what she's done. She had two men from England captive for the whole day, but I barely heard them speak at all.

I met a couple of knitters on this train and had a great time comparing notes, and moving from there to sharing about the rest of our lives.

OK, We got to Portland, late, missed closing time for the rental car, but got that fixed and arrived at the Bonham's! 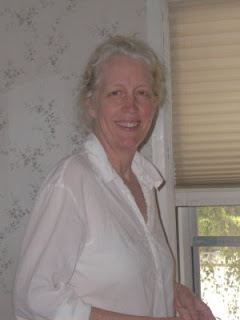 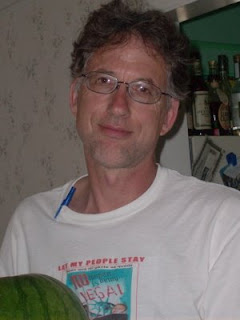 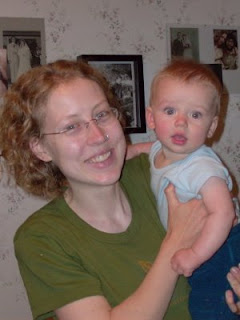 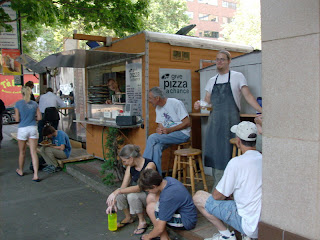 Our second day there we got to eat pizza at Give Pizza a Chance, John's pizza cart. John is the one wearing an apron.

There are a whole bunch of carts in this parking lot near the big buildings in Portland. 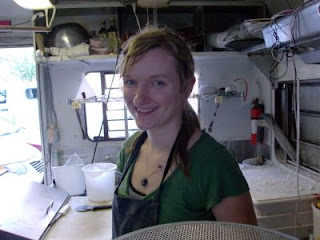 And at the pizza cart we met Kristen, who helps John with whatever needs doing every day.


After pizza we walked around Portland and then went to Multnomah Falls, which is great, but I didn't put any picture in here because it is too big to capture on film.

In the evening we enjoyed a picnic of sushi and then went to a 'Final Friday' type evening in Portland to see galleries and art stands set up in the streets.

The next day was time to depart for camping on the coast. Highlights of that day include lunch with Amanda and her friends at Salem, seeing whales close in to shore, not being able to find a camping space, crowding eight of us into a large size motel room, and watching the opening ceremonies of the Olympics while eating rotiseree chicken and bag salad from the grocery store across the street. 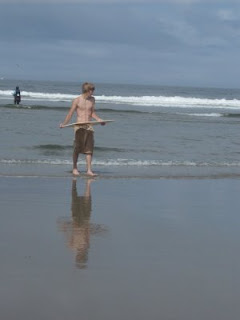 The coast is usually cold, and the next day was no different. Bonham's dropped us off to enjoy the water while they found a great camp spot. Wes was brave enough to get all the way in. Tim did some skim boarding but managed to keep his hair dry, I think.


Then it was on to the tidal pools and the lighthouse. 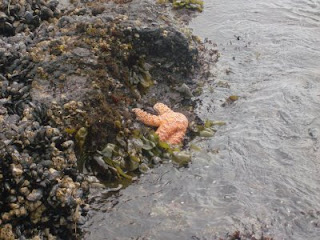 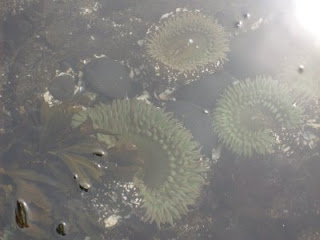 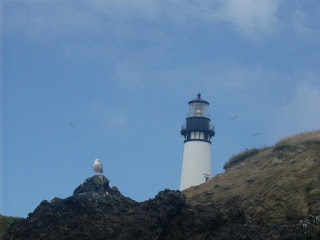 This lighthouse was designed by the same man who wrote "Robert's Rules of Order". The lighthouse is way more interesting than the rules. 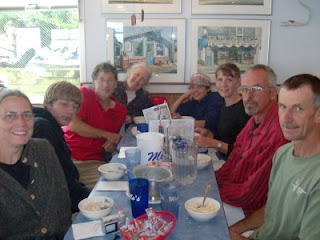 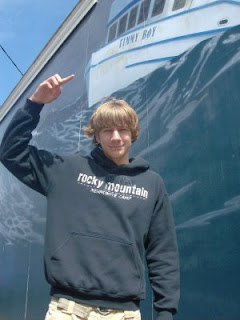 One of the murals had a fishing boat named Timmy Boy. Later in one of the artsy shops we saw a photograph of the same boat. Apparently it is still in use. 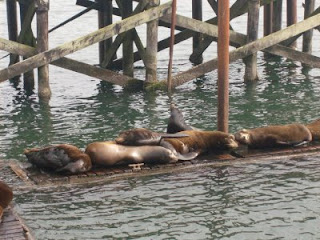 At the fisheries, after cleaning and processing the fish, the waste is dumped back into the ocean, where the sea lions are waiting for it!


I have no more pictures from the rest of that day and the next. We found our wonderful campsite and set up as fast as possible so that we could enjoy sunset on the beach. There is nothing like sunset on the beach. After the sun was down we made a fire and cooked supper---a huge pot of guiso, and brats and hot dogs. We had enough for two meals, but the day and the beach seemed to increase our appetites and we managed to eat most of it.

The next morning was clear and warm and beautiful. We enjoyed the beach as long as possible, before packing up and heading back to Portland for worship with the house church that Bonhams are part of. John was leading and the worship was thoughtful and God focused.

Then we visited the house Bonham's are buying in order to be in the same community as the rest of their house church. 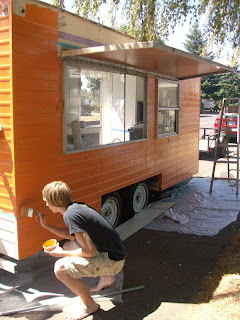 The next day we spent in Portland. The guys put a first coat of paint on John's new cart, a bigger better version that he owns rather than rents.

John found a bullet hole in the cart while we were there. Tim found the bullet. Wes is pointing out the hole. 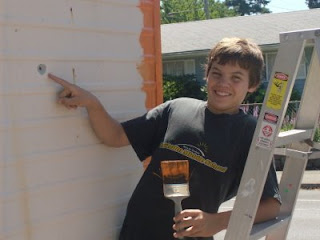 The women went blackberry picking and found plenty for a cobbler, for our waffles the next morning, and for making jam later. In the afternoon Carol, Mary Lou, and John did the second coat on the new trailer.

Larry and Carol had come to Portland the same time as us, which was great because it made it more possible for Mary Lou to take time off from work while we were there. It was also great because Larry and Carol are such cool people and we don't get enough time with them in Kansas. Our last night there we went to a look out where we could see Mt. Hood and Mt. St. Helen's. We took this picture there. 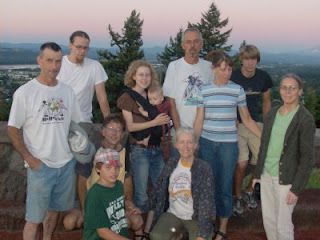 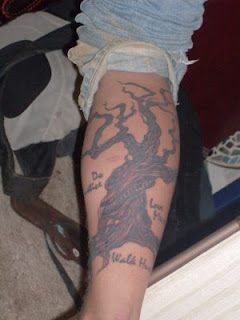 The next day was pretty relaxed. We had time to pray together before Larry and Carol had to catch their plane. In the evening we took Luke and Kristen out for Lebanese food. The food was great, but my pictures aren't. I do have one of Luke's new tatoo, though.

The words are "Do Justice, Love Mercy, Walk Humbly".

We flew out early the next morning, making for two new forms of travel for Tim and Wes. The mountains were beautiful as the airplane climbed and we could see all the way to Mt. Rainier quite easily.

When we got home, our Luke had learned to sit. 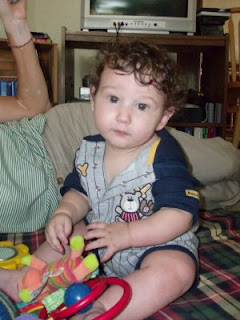 Babies just don't stop changing while their grandparents are out of town.

Anonymous said…
what a great trip report. we got reprimanded by the DA for "tampering with evidence"... apparently that bullet hole was actually part of a real case they have made an arrest for. luckily we didn't throw the slug away.
-leah
10:49 AM 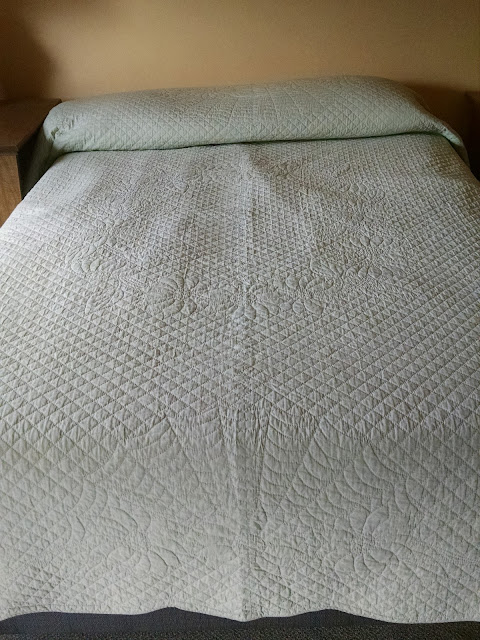 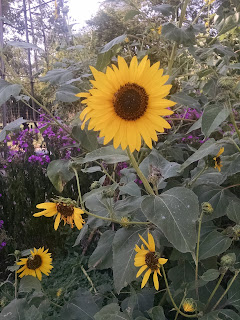